I had an appointment this morning, but then nothing on my schedule for the until I pick up my kids after school. What’s a guy with a camera and few hours to kill to do; take the road less traveled and shoot the things he always says he would if he just had his camera with him.

I cut west across the west valley, headed towards the White Tank Mountains, and pulled over here and there to see what I could capture in my lens.

To many people’s surprise, Arizona hosts a vast amount of farms, and the West Valley, being still somewhat undeveloped, is a great place to find them. Much of this part of Western Arizona used to be home to lush orange groves, but these days the land is divided up into newer suburban sprawl separated by smaller farms. Due to the twelve months of varying climate growing season, the farms found here usually rotate a wild variety of crops; from corn, carrots, and watermelon to cabbage, kale, and cotton. The farm I pulled over to check out though, almost always seems to grow some variety of carnation, baby’s breath, and wild flowers to be harvested for floral arrangements. It can be a spectacular site to see; acres of colorful flowers as you speed past on your way to somewhere mundane. I grabbed a few shots by the side of the road. With the mountains in background and clear blue sky, the flower fields make a great subject. I didn’t really do them justice, and will have to plan to return and spend some time finding the best possible photos.

In the process of pulling over in the sandy open areas on the side of the road, I spent a little time squatted down at the edge of the asphalt shooting the passing heavy machinery that travels these roads every day. That’s always a tough spot; trying to get shots of passing traffic without freighting the drivers with your proximity to the road, while also being aware of your own safety.

A little further down the road, still heading west, there is a small train yard that services CalGas amongst others. The yard here is a great location to get shots of large lines of tankers and engines slowly lumbering into & out of the yard. There seem to be few people operating the yard and it’s quiet enough that you can take a few liberties, if you are so inclined, like claiming under and on top of the trains to get some unique perspectives. I’m sure they don’t want people doing it, but if you are brief, discreet, and do not have malicious intent, you are likely to go undisturbed. I was very pleased with what I shot, but it left me wanting to go back for more, and perhaps explore some of the other train and rail locations around the area at some point.

The open day was a pleasant and fruitful adventure that I will have to repeat again. As always, I have a few shots up and will likely post a few more from this outing down the road. 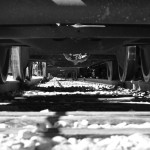 Few things scream, “I don’t belong here!” more than being in the photo pit in front of thousands of screaming fans and whipping out your family’s Canon Cybershot. Les Claypool looked down at me while perched on a speaker monitor pounding out intense bass lines and his face melted from Rock-n-Roll swagger to more of a “Hey little fella’, are you lost?”